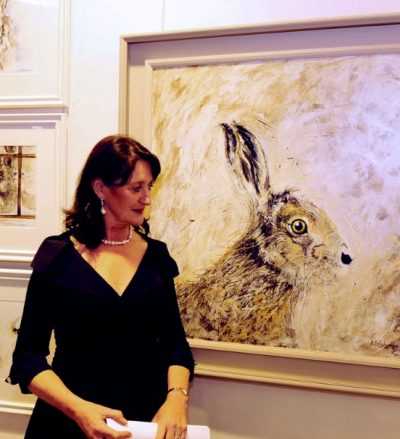 A graduate of NCAD, Dublin and having spent time in NSCAD, Halifax, Nova Scotia, her professional practice took root in her studio near Navan, between the Hill of Tara and the ancient site of Newgrange.

In an area steeped in early history and mythology, the Boyne Valley, her preferences lie in the world of Nature and through the media of Oils, Acrylics and Watercolour, her canvasses and pages fill with her response to subject matter from home and abroad.

Irish seascapes and landscapes, the exoticism of India, the snows and vibrant autumns of Canada, polar bears and grizzlies find equal footing with native hares. Pets and creatures from the hedgerows and fields of her childhood display themselves in expressionist colour and exaggerated form. The mundane embraces the spiritual suggesting her comfortable relationship with both the visible and the unseen forces of our existence.

All in all, Noreen Walshe’s oeuvre begs at least a curious eye to search further into her rich world of the senses. At best she would hope to encourage the viewer towards a reflection on the world of visual wonder in the small details around us, in the colour, line, patterns and textures of a life waiting to be observed.

Noreen has featured on TV programmes such as SPLEACHADH as Artsit representing Co. Meath, NATIONWIDE, LEARGAS AND IN 2014 SHE WORKED WITH THE BRENNAN BROTHERS FOR THE CHRISTMAS SPECIAL OF AT YOUR SERVICE/ TO THE RESCUE, painting a mural (The Four Seasons 70ft x 15ft) at the Enable IRELAND Children’s facility in Sandymount, Dublin 4.

We use cookies to ensure that we give you the best experience on our website. If you continue to use this site we will assume that you are happy with it.
By clicking “Accept”, you consent to the use of ALL the cookies.

But opting out of some of these cookies may have an effect on your browsing experience.
Necessary Always Enabled
Necessary cookies are absolutely essential for the website to function properly. These cookies ensure basic functionalities and security features of the website, anonymously.
Functional
Functional cookies help to perform certain functionalities like sharing the content of the website on social media platforms, collect feedbacks, and other third-party features.
Performance
Performance cookies are used to understand and analyze the key performance indexes of the website which helps in delivering a better user experience for the visitors.
Analytics
Analytical cookies are used to understand how visitors interact with the website. These cookies help provide information on metrics the number of visitors, bounce rate, traffic source, etc.
Advertisement
Advertisement cookies are used to provide visitors with relevant ads and marketing campaigns. These cookies track visitors across websites and collect information to provide customized ads.
Others
Other uncategorized cookies are those that are being analyzed and have not been classified into a category as yet.
Save & Accept
Powered by